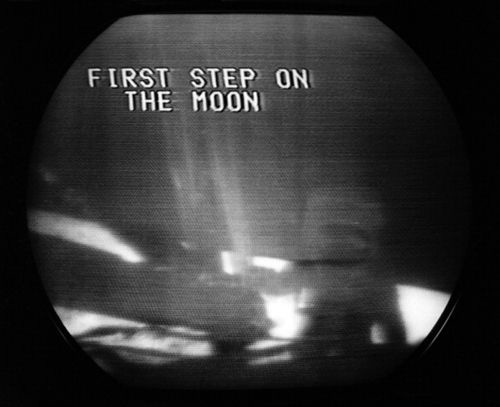 I didn’t know what Bob Gibson’s ERA was (it was 2.18, I had to look it up) but I sure knew that Neil Armstrong was from someplace called Wapakoneta, Ohio and that he had flown the X-15. I knew that Buzz Aldrin had shot down two MiGs in Korea. They were my heros (are, actually). I had a favorite Mercury astronaut and I cried as if my dog had died when I found out Gus Grissom had been killed in the Apollo 1 fire along with Roger Chaffee and Ed White (he had walked in space on Gemini 4, take that Bob Gibson.)

So it’s no surprise that I got to stay up late along with the rest of the world that night, trying to figure out how to take a photo off the TV screen with my dad in the middle of the living room floor. Then, keeping our fingers crossed for a few days, hoping that the photo would even come out, after taking the roll of film to the Fotomat. That’s how I remember that night, the whole mission in fact, right up until December 19, 1972 when Apollo 17 splashed into the Pacific, the last Apollo mission.